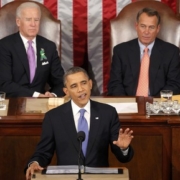 Many people, including all of us at Topos, were delighted by many of the themes in President Obama’s State of the Union speech on Tuesday – such as his strong emphasis on actions we all take together for the common good, his proposals to take steps to improve access to early childhood education, to increase energy efficiency, and to improve the economy by expanding and strengthening the middle class.

Specifically, we were thrilled by the President’s surprise proposal to raise the minimum wage. It was the most tweeted moment of the speech, at 24,000 Tweets per minute. 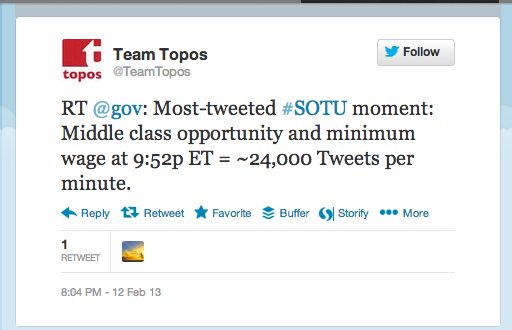 Topos’s Ford Foundation research identifies ways to have a public dialogue about job quality issues that build understanding of the state of the labor market – and broad support for a higher wage and benefits floor.

Our research tells us that Americans need to hear clear messages about how we can make jobs better. The President used words in the State of the Union speech that signal the benefits of the wage increase for all of us:

Corporate profits have skyrocketed to all-time highs — but for more than a decade, wages and incomes have barely budged.

It is our generation’s task, then, to reignite the true engine of America’s economic growth — a rising, thriving middle class.

A growing economy that creates good, middle-class jobs — that must be the North Star that guides our efforts.  Every day, we should ask ourselves three questions as a nation:  How do we attract more jobs to our shores?  How do we equip our people with the skills they need to get those jobs?  And how do we make sure that hard work leads to a decent living?

We know our economy is stronger when we reward an honest day’s work with honest wages.

For businesses across the country, it would mean customers with more money in their pockets.  And a whole lot of folks out there would probably need less help from government.  In fact, working folks shouldn’t have to wait year after year for the minimum wage to go up while CEO pay has never been higher.

Stronger families.  Stronger communities.  A stronger America.  It is this kind of prosperity — broad, shared, built on a thriving middle class — that has always been the source of our progress at home.  It’s also the foundation of our power and influence throughout the world.

We’ve been watching the news carefully to see how the debate over this policy initiative unfolds and how the White House’s framing is playing out. An informal scan reveals a mix of helpful and not-so-helpful media coverage.

Some is really well-framed, like this article on CBSNEWS.com, which makes a strong case the wage increase is good for the economy as a whole – a theme that our recent research for the Ford Foundation tells us is an important one to include in the conversation. Consider the “all of us” language in this quote from a Costco executive:

“We’d all be better off in our country if the lowest-paying jobs paid enough for people not to be on food stamps and not to be on welfare when it comes to going to the hospital,” he added.

And a well-framed quote from Chris Owens, Executive Director of NELP in the New York Times:

“The president said he was putting jobs and the economy front and center tonight, and that’s exactly what he did by calling for a minimum wage increase,” Christine Owens, the executive director of the National Employment Law Project, said in a statement. “A higher minimum wage is key to getting the economy back on track for working people and the middle class. The president’s remarks also cement the growing consensus on the left and right that one of the best ways to get the economy going again is to put money in the pockets of people who work.”

But not all of the coverage picked up the economic importance of increasing the minimum wage. It’s possible that the framing of minimum wage increases as a way to “help the poor” is so common that it’s easy for media to default to that framing, as we see in some media reporting.

For example, this article in TIME Magazine, is narrowly focused on the proposal as a benefit to the poor, asking:

“But does the law make sense for the low-income workers it aims to help?”

“But given that there’s a good chance that minimum wage laws actually hurt the people they are designed to help, isn’t there a more effective way to help the working poor?”

“…since a Republican Congress would likely be more amenable to expanding tax credits than to raising the minimum wage, this proposal seems more like a political gesture than a serious attempt to improve the lives of the working poor.” [Our emphasis.]

Topos research finds that there are risks to framing the wages and benefits conversation narrowly as a poverty-alleviation strategy.  The reality is that people are working and poor, but images of poverty (and framing the wage issue as a charitable solution to poverty) continue to cause people to default to stereotypes of long-term unemployed “looking for a handout.”

For this reason, it’s particularly critical for advocates to continue the framing of minimum wage as good for the entire economy, or “all of us”.  As it becomes entrenched, the idea that higher wages advance workers, communities and the economy, will inoculate against “job killer” attacks and allow progressives to be on offense, not defense. 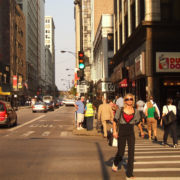 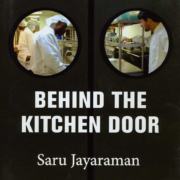 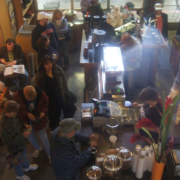 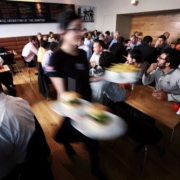 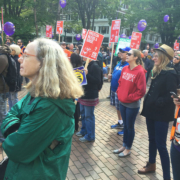 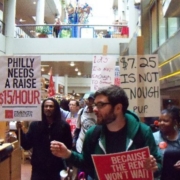 The Tipping Point on Minimum Wage
Behind the Kitchen Door