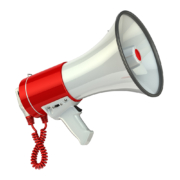 Vice President Biden aptly conveys an essential insight about our relationship to government – it isn’t possible to govern well when people are convinced government is bad, broken or unnecessary. How can public policies be a solution if government is the problem?

Many Republicans have been undermining government for decades as a deliberate strategy to limit government services, regulations and taxes. One might think that a global pandemic would change things as government action and inaction can be the difference between life and death. And yet, some Republicans continue to rail against government.

“Unbelievably, in America, I have been told that you can’t practice your religion and the state has decided that my religion is essential or nonessential,” Republican Rep. Andy Harris told protesters assembled in a Salisbury parking lot at the final stop. The speech was broadcast on the Facebook page of Patriot Picket, a gun rights advocacy group. 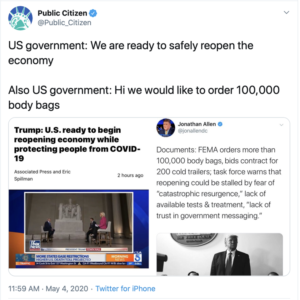 And it isn’t just Republicans. Democrats, often inadvertently, run against the government as well. The tweet at right, from Public Citizen, mocks “the government” for reopening the economy all the while knowing that it will lead to more deaths. This approach criticizes all of “government” rather than the decisions particular people currently in power are making. The unintended consequence of these types of slips is that they continue to feed a narrative that the public sector is broken, corrupt, unnecessary and so on. It would have been a more pointed, effective critique to focus on the specific actors, for example:

Trump: We are ready to safely reopen the economy

To be clear, we can, and should criticize government failures, especially now when the federal government is run by an Administration that is dismantling our democratic institutions. But we have to critique in a way that doesn’t undermine government as a problem solver, or else we won’t be able to govern or engage the public in democracy.

One approach is to critique the people, the Administration – as in the suggested revision noted above. Another way to engage the public in reform is to shine a light on government’s role in solving problems. The tweet below, also from Public Citizen, features legislation to address the Trump Administration’s lack of action – and reinforces the idea that the public sector can and should take important positive steps. In this tweet, “the government” is framed as a problem solver, the bill is a specific solution, and Warren and Schakowsky are providing a plan for action because Trump doesn’t have one. 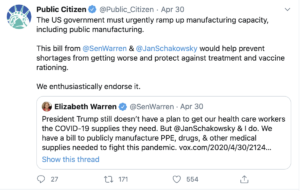 For more examples and ideas about how to promote a reform agenda while not undermining government, check out our guide: Critiquing Without Undermining Government.

Or email us at: team@topospartnership.com