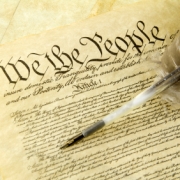 Why is it that accusations of corruption do not seem to stick to Donald Trump?

Years of research by the Topos Partnership point to two dynamics that interfere with the public’s willingness to hold Donald Trump to account for corrupt acts.

The first dynamic has to do with the public’s broad definition of “corruption.” The default view is that everything about government is corrupt, in the deep sense that it is supposedly one thing, but actually another. We supposedly have a representative democracy/republic, but government doesn’t actually represent us or work on our behalf—it instead consists of elites who act in their own interest, or for their cronies, or with unknowable agendas.

This means that most communications about corruption backfire by reinforcing familiar cynicism, alienation and a sense of powerlessness. It makes it hard to imagine any possibility of “fixes” other than destroying the whole rotten system—and who better for that job than a reckless strongman? And it makes it hard to distinguish between one person or accusation and another. (“Well, they all do it, don’t they?”)

Second, the default view is person-centered: It focuses on individual identities, choices, actions and morality. This type of thinking (“social cognition”) is one of the strongest and most habitual and automatic ways for people to think about the world—there are brain structures devoted to it—and especially when grappling with complex, difficult topics.

When people see the problem as being about individual morals, it is hard to imagine how to create change, and we fall back on judging people by whether we “like” them, or whether they “seem” honest.

To get on more constructive ground, communicators need to shift people’s focus away from Politics/Politicians, and toward Government in a less personal sense. Focusing on public systems and institutions help inoculate against pessimism and partisanship. Current public discussions of the postal system provide an excellent example, in which people resent a valued institution being politicized.

More specifically, we need to remind audiences that we only get government that serves the people when we have laws, rules and institutions that guide government in this direction. The idea of “pro-public” laws and institutions, that keep government on track, is clear and sticky, and offers people hope – especially when we show examples of successful ones in action.

If we want our government to work for us, to do things that benefit the people, we need laws and institutions that keep leaders on track serving us – and we need leaders who will build up those pro-public laws and institutions, not tear them down. What if one candidate fights for laws that let the people see everything going on with campaign money, while the other resists and undermines these laws? One wants to empower Inspectors General to root out conflicts of interest while the other wants to fire or undermine them? One wants a requirement that candidates share their tax returns, so we know exactly what financial ties might be affecting their judgement – while the other refuses to share that information? If we want government that serves us, we need leaders who support pro-public laws and institutions to keep government on track.

“Democratic House Chairs: Here’s how we can protect democracy from a lawless president,” by Schiff, et al., Washington Post, Sept. 23, 2020. (Conceptually on track, though could be written for a broader audience and would be stronger with explicit statement about how these reforms keep government on track, working for the people.)

Getting Democracy Back on Track